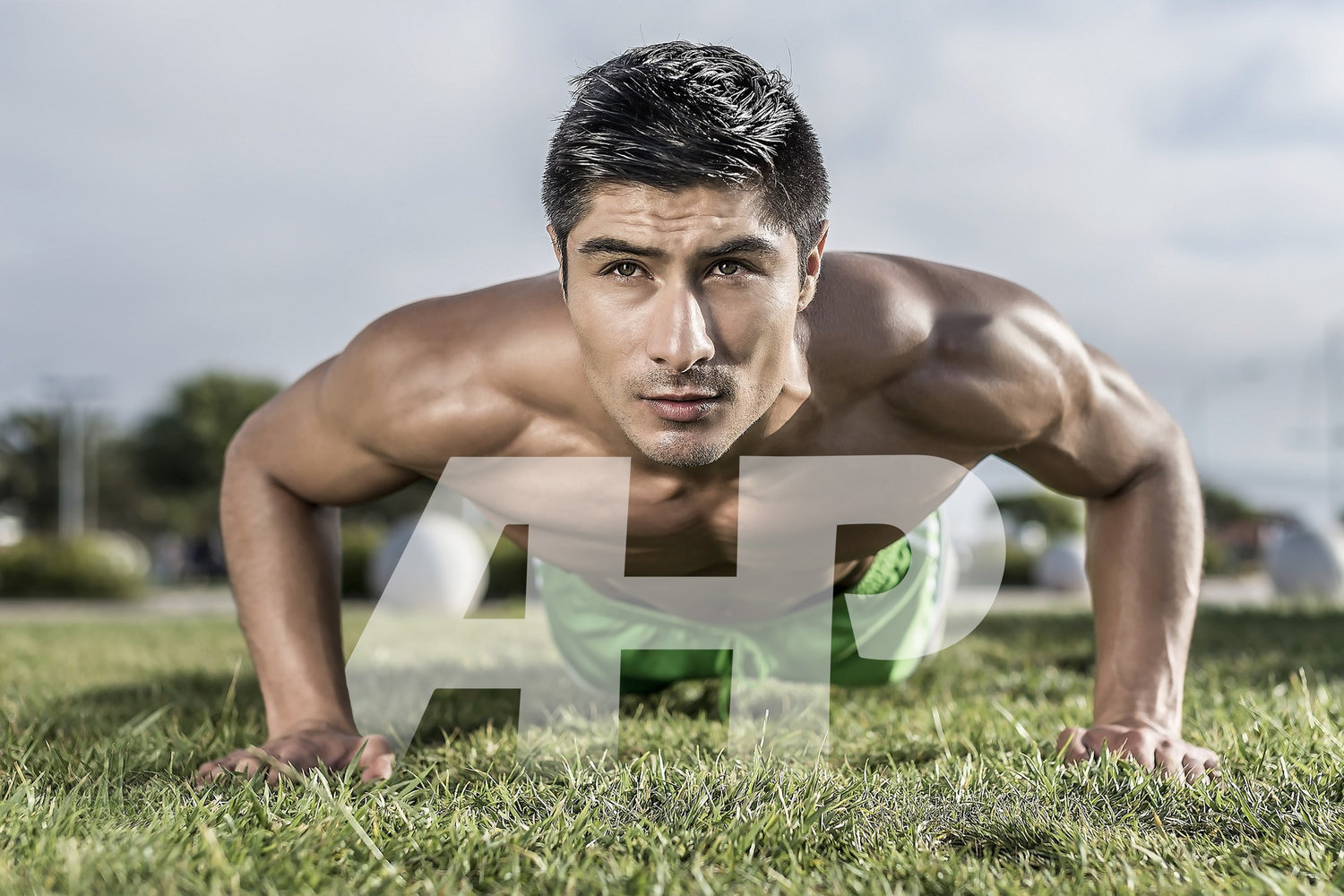 I tried this with 4 other advanced clients and each of time we found the same effect demonstrating this was in fact an eccentric overload pushup. The reasoning is a bit complex but it comes down to 4 unique elements including 1) BANA 2:1 Eccentric Overload, 2) Contralateral Oblique Sling Activation Patterns, 3) Offset Loading, and 4) Biomechanical Drop Rep Protocol.

Now I know what you’re thinking, how does the band on my leg contribute to greater tension to my upper body?? It’s a bit complicated so let’s address all 4 of the elements listed above to help explain. Yes, the movement itself is relatively simple but the science is fairly complex so see if you can follow.

1. Yes, a pushup is in fact a rotational movement since you have a single pivot point/fulcrum or axis of rotation, mainly the feet around which your entire body rotates. The farther you go up that lever the greater the distance of movement. Simply the upper torso moves to a greater extent than the legs which is indicative of a rotational movement. It’s also the reason why we want to keep the hips tall (by firing the core and hip flexors) and not let the hips sag (i.e. don’t squeeze the glutes) otherwise we end up turning a movement such as the pushup into more of a linear movement rather than a rotational movement. So what does all this have to do with this particular pushup variation.

As soon as you drive one leg up not only does it produce enormous tension into the quads and hip flexors of the support/down leg but it also translates to greater force being distributed into the upper torso and arms. That’s because the nature of a lever, whether it’s a complex or simple lever, indicates that as one end receives more upward force (the leg), the other end will receive more vertical, downward force, in this case the upper torso is being driven into the floor with greater force. Simply put the total load to the upper body during the eccentric, when the leg is lifted against the band, is greater than it is on the concentric when the leg is down representing the BANA 2:1 method.

2. The single leg band setup also targets the oblique slings in a very intense fashion. That’s because the more the leg drives into the band, the more that glute and hamstring fires also producing more tension in the quad and hip flexor of the opposite support leg. However, as we know, oblique sling activation patterns travel up the kinetic chain and impact the upper body as opposite hip flexor and quad works with opposite pectoral and anterior shoulder, whereas opposite glute and hamstring works with opposite rear deltoid and tricep. As a result, whichever leg ends up being the support leg receives greater hip flexor and quad activation thereby resulting in greater tension and activation in the contralateral chest and deltoid.

3. Here’s where it gets really cool. The unique oblique sling activation patterns previously mentioned end up producing a significant offset loading effect not only on the legs but also on the limbs of the upper torso. In other words, the contralateral arm relative to the support leg during the single leg position ends up receiving 20-30lb more total load than the other arm. And yes we actually did some brief calculations using a makeshift force platform just to make sure all of this was legit. For instance in this particular case that 20-30 lbs more loading on one side of my upper body ended up being too heavy for me to handle on the concentric. However I was able to handle it on the eccentric. Simply, the eccentric overload during these ends up being on one side of the upper body on each rep not on both sides. This is why it’s critical to use equal number of repetitions on both legs to make sure both sides receive similar eccentric overload.

4. Besides the fact that moving from a double leg to a single leg band resisted pushup position ends up producing strain throughout the oblique slings as well as providing an offset loading effect, there’s also incredibly high levels of rotational forces the lifter must resist. That’s because the narrow single leg base combined with the band tension has a tendency to want to rotate the hips and entire torso unless the lifter activates the daylights out of his or her core and abs. Simply put even under the exact same loads, the single leg position is substantially more challenging biomechanically and neuromuscularly than the double leg pushup. This indicates that each repetition is now using the biomechanical drop rep protocol meaning the concentric phase (double leg portion) incorporates a biomechanically more advantageous and stronger position whereas on the eccentric phase ,where an individually is typically stronger by 20-30%, we use a more biomechanically disadvantageous position to challenge the musculature to a greater extent.

Lastly, a similar effect can be applied to single arm pushups by using the BANA protocol and performing the eccentric phase with 1 arm and the concentric phase with 2 arms. However, the single arm pushup involves a very steep learning curve with many folks finding them very awkward especially when transitioning from the single arm position to the double arm. Simply both variations are effective however, most folks will find these single leg band variations much more user friendly and natural although it does require a slightly more extensive setup.

When it comes to applying eccentric overload to legs, this can be a bit tricky especially when it comes to squats. However, one unique method I frequently incorporate with my athletes to safely and effectively apply eccentric overload to lower body compound movements such as squats, lunges and deadlifts is the BANA. The BANA (bilateral assisted negative accentuated) method also known as the eccentric accentuated 2:1 method (i.e. up with 2, down with 1) is one of my favorite eccentric overload methods. Not only does it produce incredible gains in functional strength and hypertrophy, it also very effectively targets each limb individually during the eccentric portion of the lift as shown here by several of my NFL athletes.